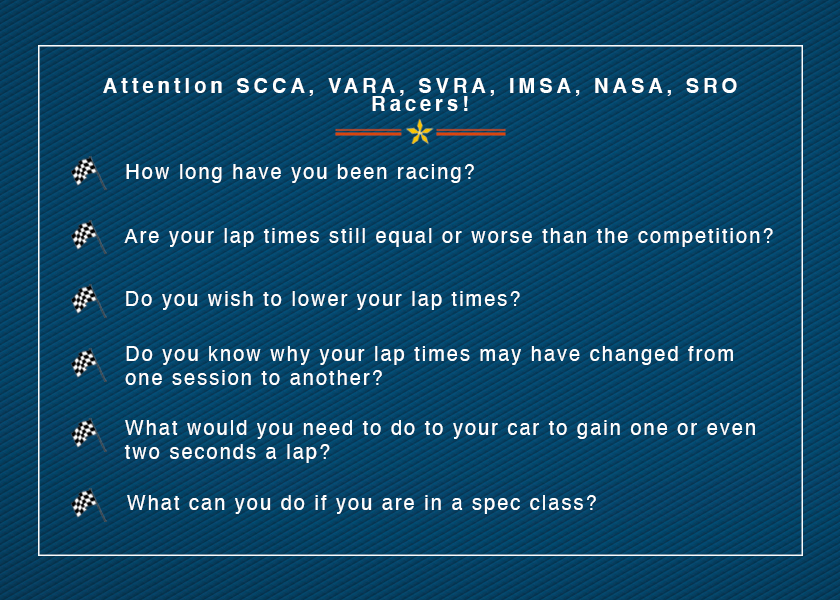 At AppliedSpeed, for some time, we have been in touch with our Garmin sources regarding a "Skunk Works" secret product for racing drivers who wish to improve their lap times. Now we have received permission to release this new virtual lap time improvement instrument to drivers competing in road racing associations like SCCA, SVRA, SRO, IMSA, VARA, and NASA.

"If I had asked people what they wanted, they would have said faster horses." - Henry Ford

Innovation fosters ideas like creating the automobile instead of a faster horse. Innovators are exceptional visionaries who implement their talents to their visions. In racing, we can argue the merits of innovating with customer feedback, but "more power" is the answer most race drivers would give when asked how they want to go faster. Garmin's novel racecar, err Driver Data Acquisition system, requires shifting the brain gears. It is so different from other DA systems that it stands in a class of its own. It instructs you, the driver, how to drive most effectively. It tells you instantly with spoken prompts on the track where and when to adjust your driving without downloading to a laptop or leaving you to interpret the data with a lack of feedback.

The True Track Positioning feature, Opportunities, displays the driver's laps from a prior session. The lap in white is a past lap, and the optimal line displays in purple. The new system allows viewing without downloading to a laptop, and it gives audible prompts where the driver needs to improve. Drivers should work on one or two sections at a time.

Ground-Breaking True-Track Positioning™ technology uses built-in accelerometers, 10 Hz multi-GNSS positioning, and high-resolution image processing. This new technology automatically duplicates your racing line within a few centimeters. The data displays on the screen and with instant voice prompts as if you had a racing coach sitting in the right seat. From there, it parses the best line, braking points, corner entries and exits, and much more, and it prompts you with verbal cues.

This video with Garmin engineer and race driver Adam Spence details all the Catalyst's features. Each segment aids drivers at performing a particular function like turning, braking, accelerating, and more. By stitching all the opportunities, the driver attains his optimum lap time.

The new GPS driven unit is an offshoot of Garmin's diversification in aviation, outdoors, sports, and automotive rooted in the employees' passions. So, it is no surprise that the Catalyst is the brainchild of Adam Spence, road racer and engineer at  Garmin's "Skunk Works." The new instrument is a brand new, Live Audio Coaching device virtual-race-driving performance analyzer that cues you to apply your driving changes with immediate voice coaching.  Understand that the new unit is a dedicated race driver coaching tool unequaled by any other racecar data acquisition device. You must interpret a spaghetti plate full of squiggly lines with other data acquisition racing instruments to figure out what you are doing wrong. The Garmin Race Driving Optimizer immediately tells and shows the driver what to do correctly to optimize any phase of his driving.  The optimizer then points to the best racing lines, braking, and accelerating metrics on track audio cues to coach the driver towards the best section and lap time.  The audio prompts tell you what to do, when, and where while on the track! 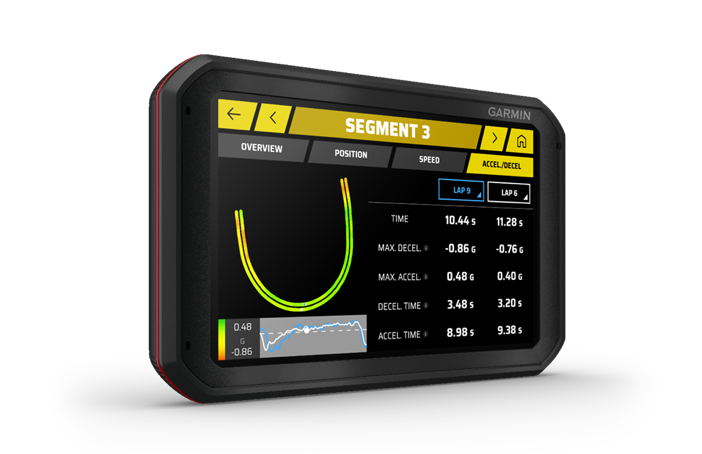 When looking at the segment category, we get taken to a page that allows us to compare lap by lap every individual turn. There you see that some of your turns are grouped together. That is important and significant because it looks at your performance and identifies when you are compromising one corner for another corner.

The new Driver Performance Optimizer relies on the most highly accurate GPS receiver (10 Hz multi-GNSS) available, and it mates that with highly accurate maps created internally. We all know that with the general public's systems, that is impossible. Instead, the Garmin units coach the drivers with positive suggestions based on his driving, not someone else's interpretation of what he is doing wrong.

Former pro race driver and racing coach Ross Bentley, renowned in motorsports as the driver who reached success by optimizing his driving, is now a consultant to Garmin. Throughout his career, the 1998 U.S. Road Racing Champion and 2003, 24 Hours of Daytona winner has coached thousands of high-performance and race car drivers of all levels ranging from beginners to Indy 500, Le Mans, and NASCAR winners.  Ross has lowered his lap times by nearly a full second on a familiar track, merely using the Garmin Catalyst, and to us at APPLIEDSPEED.com, that is how you apply speed!

Other data devices leave you with a plate of spaghetti to interpret. Even trained engineers find it difficult to quickly interpret the data and then relate it to the driver. Garmin's Catalyst gives feedback turn by turn in audio form while on or off the track to identify the areas of improvement.

WHY YOU NEED A GARMIN CATALYST!

You probably have a checklist of checks and adjustments you perform before each race, like adjusting valves, checking ignition and cam timing, wheel alignment, check corner weights, set the best gearing, and more to tune the car to the track.

So Why Don't you do the Same for the Driver?

How do you get him tuned to the track? Most drivers are no Patrick Long or a Jeremy Shaw. Drivers of that caliber have raced on most U.S. tracks, and they can recall their lines even years later. Using the Catalyst gets you ready to perform your best to complement every time you return to the track.

Look, you probably already spent a season's worth of racing cash on power enhancers like new cams, a cold air intake system, or the latest "trick" supercharger heat exchanger trying to lower your lap times. But, like Carroll Smith—1966 Ford GT40 Le Mans-winning cars' engineer—said: "Eventually the driver is the one who has to win the race." And YOU are the driver! The Catalyst is the only data logging device that automatically logs the weather experienced while recording the data. Shown in the picture is the included dashcam that records the track and the driver's lines within a few centimeters. 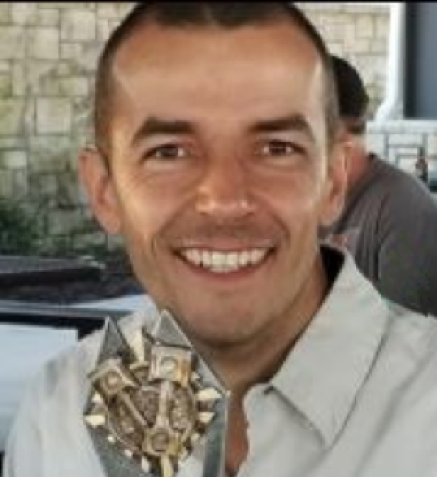 Adam Spence is a British racer and engineer working at Garmin USA in Olathe, Kansas, who developed the Catalyst. Adam has taken a very different approach from the older general-public systems. Spence: "There is no cartographic data baked into the device. All you see on it is a real track that was created dynamically by the driver." 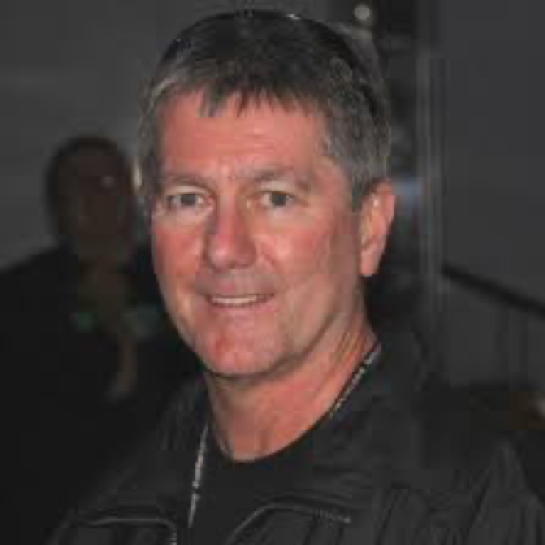 "Over the past couple of years, I have been consulting with Garmin, the same company that utilizes the highest GPS technology levels for products in avionics, marine, watches, and off-roading on a product for motorsport, and they just announced it. I had been reading the squiggly lines on other manufacturers' products for twenty years, and it still takes me fifteen minutes to dissect them. With the Catalyst, it is instantaneous!" 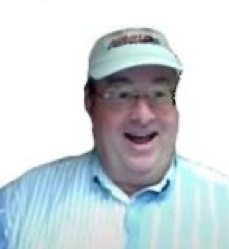 "With this [the Garmin Catalyst], intermediate and advanced drivers progress more quickly based on objective information than anything except a very, very experienced coach in the right seat".

Ross Bentley is reviewing data from previous sessions. Times comparisons show on the right, and the best line shows on the left of the 7-inch display. Even a professional driver/coach like Ross has knocked off nearly a second off his best time. 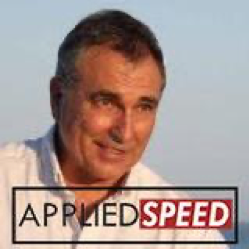 "At APPLIEDSPEED.COM, we sell speed parts, and now we are selling the Catalyst because we deem the product to be the epitome of how to "Apply Speed." This new race driving performance optimizer digital driving coach has advanced above the GPS race lap timer. In my 40-plus years in many motor racing forms, I have never witnessed such an innovation to improve racers' performance. Garmin Race Driving Optimizer is a must-have for any road racer, new or seasoned."

Garmin's choice for the word "Catalyst" is quite fitting. Merriam-Webster defines a catalyst as "an agent that provokes or speeds significant change or action." Indeed, the new tool is sure to provoke speed improvements by expanding any road race driver's driving envelope.

Key Unique, Innovative Features That Set the Catalyst in a Class of its Own.

The new innovative instrument is a virtual racing coach that yields immediate session analysis to help drivers of all levels achieve their full track driving potential.